From the Archives – Newcastle, Australia becomes a Welcome Town for Refugees

Way back in 2002 I was part of two groups which had a focus on human rights and refugee issues.

Hope Caravan logo we used on our now absent website. The drawing was based on an original pencil drawing made by a prisoner at Woomera Detention Centre. He gave us permission to use it.

Now that the dark years of the John Howard’s Decade is over in Australia, it is important that we are reminded that there were people in Australia (many, many of us) that were ashamed at the opportunistic tickling of the xenophobic underbelly of the Australian people that Howard’s genius did. People say that he was not a racist. Maybe he wasn’t in a way that Hitler was, but his myopic vision and policies that demonised innocent people who were seeking a new life were.

Anyway, I don’t want to go on about him here, suffice to say that there were Australians around during the Dark Howard Decade who stood against his crap.

My social conscience is clear and I’m proud to say that I was one of them. 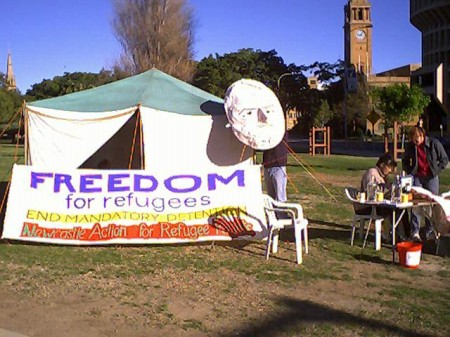 NARR conducted a sympathy fast with the hunger strikers at Woomera Detention Centre in 2002. This is the tent we lived in at Civic Park, Newcastle. The head on the corner is a paper mache of Philip Ruddock, the Immigration Minister at the time.