A Night at the Wailing Wall in Jerusalem

I’ve been thinking about the situation in Israel and the Gaza Strip catastrophe.

My thinking reminded me of the time I was in Jerusalem visiting the Wailing Wall.  On my first night in my cheap hostel in Jerusalem, I was trying to use an internet connection that was a slot machine and for some reason it wouldn’t accept my coins. While trying to get it to work I heard a voice from behind me say in an American accent, ” Hi – are you Palestinian?” I said, “No”. He then asked, “Are you an Arab?” I again said, “No.” He then asked if I was a Jew, I again said, “No.” In slight exasperation he then said, “Well, what are you then?” I was tempted to say that I’m an Earthling but I thought better of it and replied, “I’m an Australian.”

He was shocked and said, “You sure don’t look like an Australian!” I, being in a diplomatic frame of mind, explained to him that I migrated as a young child from Greece and anyway what did an Australian look like? It was obvious to me that he had an image of an Australian that was imprinted in his mind by the Paul Hogan ‘Shrimp on a Barbie’ advertisements which Americans were inundated with. 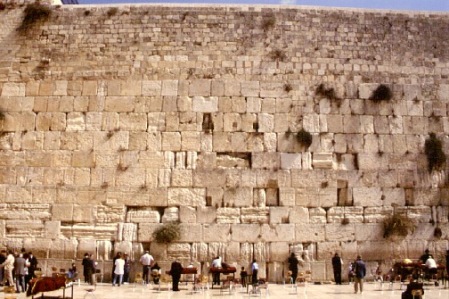 This is the holiest shrine of the Jewish world. The Western Wall is part of the retaining wall supporting the temple mount built by Herod in 20 B.C. After the destruction of the Second Temple in 70 A.D., Jews were not allowed to come to Jerusalem until the Byzantine period, when they could visit once a year on the anniversary of the destruction of the Temple and weep over the ruins of the Holy Temple. Because of this, the wall became known as the “Wailing Wall.”

After some small talk he invited me to meet up with some of his friends to visit the Wailing Wall since I had just arrived and hadn’t seen it yet. I accepted his invitation and along with his five other American friends visited the Wailing Wall. After a short while they told me that they were Christians and if it was alright could they pray for me.

Hell, I could use anybody’s prayers so I said, “Sure, you can pray for me!”  They then made a circle around me in full view of the Wailing Wall and they said their prayers. I felt a certain intensity of energy from them and it became clear that they were Born Again Christians. I then asked them if I could pray for them Greek Orthodox style. They had no idea what I was talking about but once I explained to them that Greek Orthodoxy was a Christian religion they allowed me to do so. I also explained to them the gesture of crossing myself using my three fingers with the thumb symbolizing the Father, the index finger – the Son and the middle finger – the Holy Spirit and the two fingers on the palm of the hand symbolize the two natures of Jesus Christ – the human and the divine. Some Orthodox say the third finger curled into the palm symbolizes the Mother of God and the little finger symbolizes the Hierarchy of Angels. So, I told them my hand held the Holy Trinity, the Mother of God and all the Angels. I proceeded to pray for them in my own way and crossing myself in the traditional Eastern Orthodox way.  (Also see an interesting item about the Sign of the Cross – The Royal Seal of Christ by clicking here)

When I finished my prayer for them they proceeded to tell me about how the second coming of Christ was going to happen very soon and that was why they were in Jerusalem.

I asked them how they felt about the injustice inflicted on the Palestinians by the Israelis. They all agreed that the Palestinians were getting a raw and unfair deal. I was surprised, so I said, “Right, so you agree that the USA shouldn’t be so one sided about supporting Israel at the expense of the Palestinians?”

That was when I saw another side to their words of apparent peace. “No,” they said, “America should support Israel even though the Palestinians are in the right because only if there is a war in the Holy Land will the Second Coming of Christ happen.”

I was shocked to say the least. I said, “What – you mean to say that you want a war here so that the King of Peace can come?”

They told me that it was the only way and that it shouldn’t matter that the Palestinians are treated unfairly because the final outcome would be 1,000 years of peace once Jesus Christ returned after Armageddon.

I returned to my hostel where I slept on the roof since it was cheaper than a room. From my right I could hear a choir sing Christian hymns coming from a hall near the hostel and interspersing the hymns I heard machine gun fire echo through the night sky that came from any direction.

The machine gun fire sounded far off and as I was trying to go to sleep I kept flashing back to the surreal conversation I had near the Wailing Wall.