Australian Mining Industry wants to take over our Media

I remember the image on TV, these billionaires chanting, sounding like, “Billionaires united, we’d never be defeated!!” with all these pathetic little people carrying pristine clean, fresh off the printing press placards supporting the billionaires. Unbelievable! Until you remember the same kind of images of Tea Partiers in the USA. The Tea Party, it would be OK if they used the word Tea to mean what it meant in the 1950’s, the street name for marijuana because it would be a joke. Alas, it doesn’t mean that and when they talk about the movement being a grass roots one, well, it has now been called an astroturf movement. The right wing in Australia has taken any lessons from the Tea Party and have imported them into the Australian context.

The truth has just come out via a video recording about what the Australian 1% really are planning. They want a Fox News kind of media that is a propaganda machine for the 1% super rich and right wing free market believers. In many ways they already have it in Australia with Murdoch owning over 70% of news outlets. However, this isn’t enough. They want to take over Fairfax which runs the Sydney Morning Herald, The Age and the Australian Financial Review. This means that the 1% (actually we are talking about mining magnates that are probably in the top 0.0000001%) will have ALL media outlets sympathetic to climate change denialists and billionaires who believe that corporations are people.

One of the most worrying aspects to all this is the following quote :

“Fascism should more properly be called corporatism because it is the merger of state and corporate power.” — Benito Mussolini

This is happening in the USA, UK and now most of Europe. In Australia it is beginning to do so in a big way and if the conservative Liberal/National Coalition wins the next election it will be done. Corporatism / Corporatocracy / Fascism does not necessarily have to embrace racism, though it does most of the time. As long as there is access to cheap labour, the transnational corporations are happy. This is why Gina Rhinehart and her buddies are keen to have temporary visa holder workers in their mines.

Watch the video below and see why Rhinehart is buying Fairfax shares. Watch it and make a vow that you will do whatever you can, in a peaceful way to stop them. Labor are you listening? 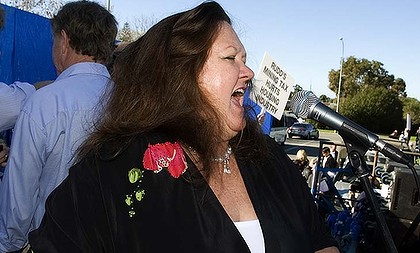 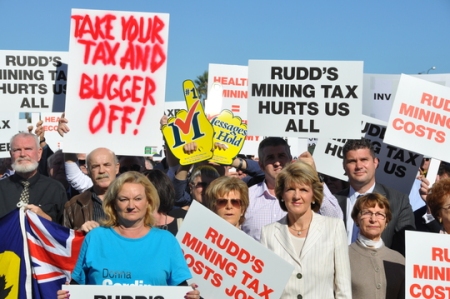